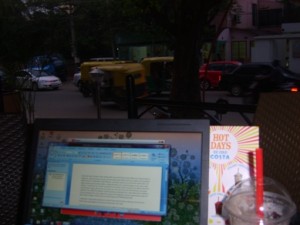 My friends, the topic for today is tastes and an intro to sounds, starting with where I am sat now…at my very first visit to a Costa Coffee since I have arrived on Indian soil. I know everyone in Europe will know what Costa Coffee is but not sure about my friends and family in the U.S. so basically it is like a Starbucks – generally really over-priced but they make perfect iced lattes and have American style muffins, cookies and cakes so it is worth the high prices to enjoy a taste of home.

First off, there are Costa’s everywhere so it is great, I know I can jack up on caffeine whenever I need to which is fab.  The one I am at now is just off a street call 100 Feet Road and has a large outdoor terrace.   At the moment I am sat on the terrace listening to this amazing soft combination of a couple sitting down chatting in the local language (Kannada is spoken here by about 50 million locals), a group of teenage girls next to me are having fun talking in English about random blogs they read and about their classes (they were very sweet and actually told me the name of the local language here!), and then last but not least I hear the constant and overwhelming sound of HORNS that go off every .5 seconds.  I will get to the horns maybe tomorrow because Bangalore traffic deserves its own post!

Anyway, the iced vanilla latte is amazing. But what is really amazing and VERY different from Barcelona and California are the prices! Man… the price of ice, coffee beans, milk and a plastic cup really must vary from one country to another!!! My medium-sized iced vanilla latte was the deal of the century and only cost me $2! And the large is only 20 cents more (from small to medium is also 20 cents more). AMAZING!! In Barcelona I think I paid about 4 euros last time I had one. 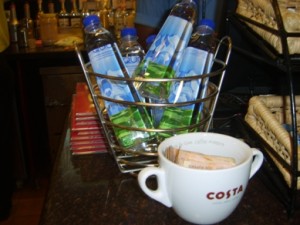 Next thing I also loved was that the large cappuccino cup that serves as the tip jar for the staff isn’t directly next to the register. It is in front of a rack full of snacks and a bucket of water bottles that are in FRONT of the register, basically out of sight of the staff. And it was full of 10 Rupee notes, probably about 200 Rupees in notes total there, easily within reach of everyone. Don’t get me wrong, I know that this isn’t a pot of gold (it’s the equivalent of $5) but in Barcelona that money would have been stolen so quickly and so expertly. It makes me happy to know that we have moved to such a safe and friendly city 🙂 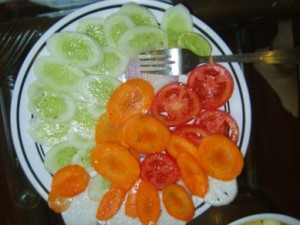 Fatty fatty fatty ALERT!!!  Well, I woke up even fatter this morning and decided that I really need to kill this Sumo rice belly I have grown over the past week so I ordered the green salad from room service menu for lunch. I mean, a green salad is a green salad anywhere right? No need to inquire about the ingredients?? Nope, it is not! Haha!  My salad arrived and to be fair it did have one green veggie on it (cucumber) but it was essentially sliced raw veggies on a plate, which the guy explained was indeed a green salad. So when I inquired about the oil and vinegar he said “no, no, ma’m, you take the pepper and the salt and put it there and you put the lime ma’m” …. This was all new for me but I did what he said.  I sprinkled some salt and pepper and then squeezed the juice from two lime wedges all around and you know what?? It was really, really tasty! And even fewer calories than oil and vinegar so score! I also ate a nice bowl of fruit salad for dessert, which was so fresh and sweet.  It was a combo of pineapple, apple, green grapes, watermelon, almost black colored grapes, candied cherries (now that was new!), bananas and one other fruit I can’t place but I think it might have been a fresh date (really sweet, soft like a banana but really grainy). Will have to ask the room service guy next time because it is my new favourite fruit!! 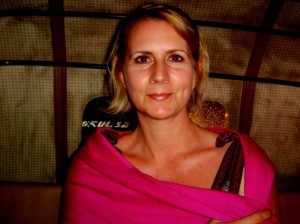 Whoa, I had to move from Costa!  Unfortunately, I am now back at my hotel because it started to really pour down cats and dogs so I decided to jump into an “auto” (a motorized rickshaw) and head back the 7 blocks to the hotel before they were all occupied and I was stuck either walking or drinking coffee for a few more hours!! I am really looking forward to finally having my car and driver next week so I have some freedom.  Here in Bangalore it is really different from Barcelona…the taxis won’t come for someone when the distance is only several blocks like it is for me from my hotel to the restaurants on 100 Feet Road.  So when it rains it is better for me to just stay in.

One last thing, I have good news!  Late last night our offer on the flat we wanted was accepted!!  Now I am simply waiting to sign the contract, either tomorrow or Monday morning.  Once I sign the contract I will share a video tour and more details of our new home for the next 2 years for my daughter and at least the next 3 years for me.