In true macho style, I am writing to you tonight from the comfort of my own sofa, flat-out lounging with my laptop on my stomach (thank you 80s California elementary school system for teaching us girls how to type properly so we could grow up to become secretaries, haha) and…I am multitasking by watching RAMBO III on Star Movies.  Is there anything more macho than Sly Stallone as hunky Rambo?  I don’t think so!!  And after living off and on in Spain for 18 years you would think that I would have seen every kind of macho-macho man around but it turns out that I still have a lot to learn 🙂

For me, at least so far, India is a wonderful dichotomy.  A place full of diversity and traditions that I could never personally live with but love learning about.  A place with the most MACHO of macho men.  Yet also a place where those macho men turn pretty girly on a frequent basis and that is just A-okay for everyone.  It’s fabulous, and no one seems to care.

Today’s blog post was inspired by a few of the Indian macho men in my life.

Virtually everyone in our company eats their lunch on the rooftop terrace cantina.  I think that in itself is pretty cool on a few levels.  First, I have never worked anywhere in the U.S. or Europe where we had an open air “penthouse” cantina, especially not one where everyone eats together, including the chiefs, executive and management teams.  I don’t mean this in any way than how I am saying it, it is really cool.  Aside from eating at my desk from time to time, I don’t even remember bringing my lunch to work more than a couple of times in 5 years.  So this is again part of the new, fun life I lead in India.  Well, today I was sitting down at “our” table along side five of my work mates.  As always, I looked down to see what everyone was eating today and you will not believe what I saw!!  My most macho work mate from here in Bangalore, (the one who says my style of dressing is “extreme” on the liberal scale) was eating his lunch out of a Winnie the Pooh lunchbox which I assume isn’t normally his, haha.  And he wasn’t trying to hide it, he was pretty okay with today’s lunch box.  We were all giggling, and he was having fun with it too, right along with us.  As confident and macho as always even with his Winnie the Pooh lunch box 🙂 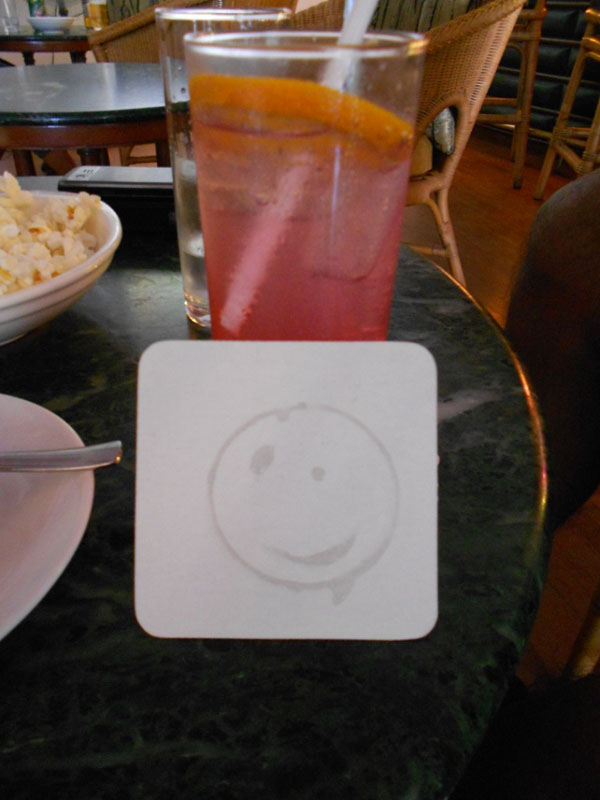 Rest assured, macho men are all over India, not just Bangalore.  Last weekend when I was on my mini party weekend in Chennai I was cracking up laughing a couple of times following the antics of my dear macho friend there.  We were out at Vivanta by Taj in Fisherman’s Cove, had just sat down to watch cricket and were placing our order for drinks at the pub with the waiter.  I ordered a champagne julep (they are delicious, try one next time you are there!) and expected my mate to order beer or possibly even a mocktail given that he would be driving later.  But oh no no no….  He didn’t go for anything I could have imagined in a million years.  No draft beer, no juice or coke.  What did he order?  He ordered a Shirley Temple! haha  A super pink, very cute looking Shirley Temple with a cherry!  haha  I was laughing so hard and then decided that I had to take a photo of it.  As my mate grabbed the glass to have his first yummy sip of his super girly Shirley Temple he looked down at the coaster.  The glass had actually made a smiley face imprint on the coaster 🙂  That was classic!!!  See the photo!

Now on top of these couple of “cute” incidents with mates, I have a couple favorite random things that for me are very different, that in India are quite commonplace and NOT considered different at all.  I have already mentioned my male colleague’s fabric handkerchiefs but this definitely deserves a mention here in the macho man post.  Recently I also learned that a friend of mine belongs to a badminton club and that this is taken quite seriously as a sport too.  At first I thought he was joking.  I mean I used to play badminton in Georgia at my Grandparent’s place when I was a kid.  And in my head this is an old-fashioned game for girls and boys on a lazy summer afternoon.  But no no no….the macho men of India have changed the name to Shuttle (I think that was it, anyway) and have proper leagues and teams and clubs for it.  To be honest, I remember having fun playing it so I totally get it 🙂  Go boys!!!

I guess that’s all for now, but with the unending quantity of raw material I have from the macho men of India, I will write down more macho man tales and come back another time with Part Two for you 🙂