Recently the Deccan Chronicle reported on the drinking problem of Malayalis, using a headline grabbing statistic that just under 1/3 of the people consume alcohol there in order to try and inspire clicks across their social media channels. The article came in true Indian style with a funny over-the-top illustration and seemed to be more in line with a moral-police piece than a hard hitting expose on the topic. At first I saved a screen capture of this solely because of the ridiculous illustration that a serious newspaper used to promote it’s article but then I started thinking … a bit about the headline, a bit about the message in general and a whole lot about how alcohol is consumed and viewed here in India.

The idea that 1/3 of a certain group of people are drinking alcohol is shocking to some Indians but honestly I cant’ get my head around it. As most of you know, I was living almost 10 years in Barcelona, Spain before moving to India in 2011. There everyone drinks. And when I say everyone, I don’t mean it facetiously, I literally mean everyone I knew in my life. Everyone. The country is one of the top leading exporters of wine in the world and wine is in everyone’s blood. Children start drinking wine diluted with sprite or 7up from as early as their early teens. The legal drinking age for kids is 18 but most start going out to clubs and bars at around 16. Around the lunch and dinner tables everyone generally has a glass of wine or some beer. I literally don’t know a single person from my old life who didn’t consume alcohol. Nor did I have a single friend who was an alcoholic, nor was anyone I personally knew in my day to day life (although there were a couple of “town drunks” but every town in any country all around the world have those). Honestly, I didn’t personally know a single drunk. None. Even my daughter never felt compelled at 16 to binge or go crazy with alcohol because it wasn’t forbidden given that I offered it to her from her early teens so she wasn’t curiose about it. She was responsible in a way that some Indians aren’t at times. 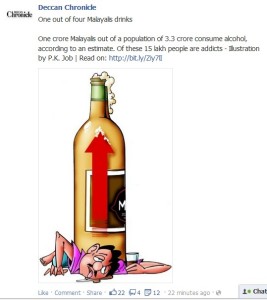 Well tonight when I ran across this screen grab from Facebook, what had really bothered me about it clicked for me and a light bulb went off in my little blonde head.

Here in India, the reality of the situation is the opposite to Spain. Drinking is frowned upon – not expected as a part of everyday life. People who consume alcohol are judged by others, not viewed as “normal people” by everyone like in my old life. Some Indians seem to binge and abuse it constantly, instead of just sipping alcohol post dinner to take the edge off the day. Why is this? In my opinion it is partly because there is no culture for consuming alcohol so lots of Indians drink it wrong, plain and simple. Kids and adults alike often drink too much, too fast, and it results in a whole lot of messiness. Except for spring break in Mexico or crazy weekends down in Tijuana when I was 18 I have never seen so many girls and guys carried out of clubs – NICE club at 5 star hotels – like I have here in India. In Spain, people are out from midnight to 6am drinking non-stop and I can count on one hand the amount of people I had seen carried out in a year – because people were taught to pace themselves and not get drunk. But in Bangalore seeing friends carry out a mate is a nightly occurrence a couple times over.

Now my Mom is not going to love this but for me part of the reason for all this is simple. My Mom was really strict with me when I was growing up as a teenager and she basically forbid most everything … making EVERYTHING she told me I couldn’t or shouldn’t do desirable and exciting. This essentially sealed the deal and ensured I wanted to taste all that forbidden fruit she said I couldn’t have. And since my Mom didn’t want me to, well that made the fruit all the more sweet.

Maybe alcohol in India is just that. Forbidden fruit. Here in India, only the upper-class or jet-set seem free to drink without too much backlash, the rest of society has a seemingly preconceived notion about booze and how they will judge people who sip it – and definitely those who abuse it.

But what if, just maybe, it wasn’t such a naughty thing. And it wasn’t forbidden fruit. I mean come on, smoking kills more than alcohol and that is legal and soooo many people smoke here. Couldn’t alcohol become a normal part of life so that people could just enjoy a sip here and there without getting sloshed, abuse it and … well, drink it wrong? What if there was some education about alcohol instead of pretending it will go away eventually and then judging people for drinking it? Because I’ve gotta say, as an outsider looking in, the current system is not working. Obviously change won’t happen overnight and it will take a generation or two but … starting on a new path seems better than the current forbidden fruit / judgement system in place.

Hell, maybe that would even help to drop wine prices in India! In Spain, an AMAZINGLY yummy bottle of Rioja wine can easily be procured for Rs. 350 but here you have to pay twice that for “just okay” local wine. The insanely high prices keep wine out of reach for most people and ensure that the little briks of brandy are the only thing economical enough for people who might enjoy a drink. Not a fun option compared to Champagne and wine let me tell you…

© 2013 Angela Carson. All rights reserved. Do not reproduce any part of this article without the author’s permission.

Weekend Getaway to Chennai, India: Holy COW It Is HOT-HOT-HOT

I Miss Living In India During IPL (RCB Cricket)