IPL6 is on like Donkey Kong and I am thrilled to be more involved this season than last.  Thanks to the overwhelming support of the first article I wrote about the IPL cheerleaders last year to dispel the myths and negative rumours surrounding them, many new opportunities have opened up for me and I’m having a BLAST with IPL this year.  It seems that people appreciated reading the real stories of the lives of these girls and that not everyone wants to see naughty or flirty pics of the girls.  So this season I am the cheerleader of cheerleaders it seems.  I wrote a 6 page article on the history with a full overview of IPL cheerleading for Wisden India this month.  My 4-page cover feature on the Delhi Daredevils White Mischief girls is being published in the national print magazine Maxim India, coming out the first week of May.

And now I’m doing a piece just for me.  Just for fun … to chat face to face, during a normal match day, with the White Mischief cheerleaders I interviewed recently for Maxim.

I really was looking forward to my afternoon with Alina, Lidiia and Jane.  You see, the week before I was scheduled to spend a few hours with the girls in Bangalore in their dressing room, at a photo shoot and then later in the green room of the KSCA, I had interviewed them for two hours via video Skype.  Now I was interviewing them even more ‘behind the scenes’ to discover a bit of what it’s like to be one of these sweet girls from the Ukraine for a day.  Royal Challengers Bangalore and Kings XI Punjab also have White Mischief cheerleaders but I was spending the afternoon with all of the girls from the Delhi Daredevils this time round.

Although their job looks completely glamorous with the paparazzi bulbs going off non-stop whenever the White Mischief cheerleaders are around, it’s interesting to see the reality of their life as an IPL cheerleader.  Jane, Alina and Lidiia were all smiles and hugs when I arrived to their hotel room.  They gave me a wonderfully warm greeting – and after two hours of video Skype with about 11 power outages affecting our wifi every 10 minutes, it really was nice for us all to meet in person finally.

The ‘other side’ of the glam life of being a White Mischief cheerleader become evident almost straight away when I asked about their day so far!  They laughed and shared that their manager had told them, “Okay girls, you can either eat lunch or catch up on sleep today.  Which one do you want?”  Ouch!

The White Mischief cheerleaders were sat on an airplane to Bangalore before 6am that day and were logically tired by the time they reached the hotel, located downtown near to the stadium.  Their duties began right when they arrived though so by the time early afternoon rolled around and they finally had some time to themselves to nap and reenergise before for the match, they had to make a choice.  Food or sleep, but not both!  There just wasn’t time.  All three girls told me that there is no competition.  They will always pick food over sleep because it’s impossible to feel sleepy during a match!

In Delhi the 10 girls all stay in service apartments.  They have four rooms, two with three girls each room and two rooms housing two girls in each.  They eat and play tourist and take care of their cheerleading duties all together.  “It’s so nice to see so many girls in pyjamas at night, or during the day on the rooftop pool in their swimming suits when we go to sun bathe,” says Jane.  “It’s nice, we eat and cook together too, and make Ukrainian food for the Indian management team and they really like it.”

Alina, who was on the Junior National Ukraine Gymnastics team for four years when she was younger, training all day, six days a week, is the most seasoned acrobat on the squad.  She shared, “We try to do our best to look like we sleep enough but it is hard at away games.  It’s really energetic at the stadium though so it is easy to be genuinely happy.  And the Delhi fans give us so much energy….”

As I was sitting there with my laptop typing in notes and having fun laughing with the three girls, they were putting on makeup, braiding each other’s hair and getting ready for a photo shoot, then it would be straight on for the stadium.  It was nice to see this softer side of them, away from the formalities of a traditional interview.

I inquired about how long it actually takes them to glam up for a game and Lidiia told me that getting ready depends on the amount of time they are given.  If they are running late and there is only 30 minutes then they power through in record time and do what they can.  Otherwise, they can take up to two hours to curl and style their hair and perfect their makeup.  Personally I don’t know how they can spend two hours getting ready but I don’t have a hundred cameras on me at all times.  I suppose that would make me shake my ass and take the idea of getting ready more seriously – more as an art form than just something we all do before leaving home! 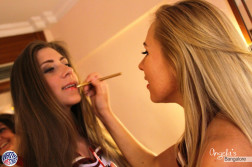 We headed up to the rooftop next for the photo shoot and I was able to meet the rest of the team.  They are all so sweet, some spoke superb English, others not more than a few words, but all had lovely things to share about India and their experience so far:

Once the photo shoot on the rooftop was done and I had taken a couple of videos, it was time to head over to the stadium where the Delhi Daredevils would be playing RCB.  We went up to the top floor of the KSCA where their ‘green room’ was located.  Now, the green room for visiting cheerleaders isn’t at all as glamorous as the green room they have at their home stadiums.  In Bangalore it is a simple hotel room and the girls must curl up on the bed together or sit in one of the two chairs.  In Delhi, however, they have a private gym where they can work out and a cozy chill out lounge just for themselves.  It’s nice and air conditioned and perfect for relaxing before a long match.

Each of the girls has a fun “tell me about yourself” story to tell.  They are indeed sexy and stunning but they are wonderfully sweet and caring.  The girls I met were all college graduates (or working on it) and have gentle, warm spirits.  They’ve all been in dance training since they were four or five years old, and several have taken gymnastics for that long as well.

On a personal side note, the one thing that keeps me writing articles about cheerleaders is that I still hear friends of mine talking about girls they’ve never met in a negative way, based on assumptions and judgements.  At parties I find myself explaining that cheerleading is a sport where I’m from and I share that my daughter used to cheer from the time she was five years old back in California.  The judgement comes from their attire more than anything else but it really shouldn’t.  At the end of the day, uniforms are just that – uniforms!  Any athlete uses them to ensure that their movements aren’t restricted.  From swimmers to runners, tennis players and ballet dancers … even cricket players.  They all wear a uniform.  So next time, I hope my Indian friends will humanise the cheerleaders here.  They are girls who come to their country in awe of it, to soak in the culture and work hard during IPL.

The White Mischief cheerleaders who I met with, luckily, seem completely sheltered from the types of judgement that I seem to hear spoken at parties, which I am very glad for.  They shouldn’t feel any of that.  In fact, none of them had a single negative thing to say!

My afternoon was really fun, and watching them cheer and cheer and cheer during the match was really enjoyable after spending so much time with them one-on-one.  Oh, and a sore neck from when they tried to teach me part of a routine that ended with a sexy hair flip.  There I was trying to overcompensate for NO long hair with an extra flip of my neck but that was just plain stupid!  I’m leaving the cheering to the pros!

CLICK HERE for more on IPL!  Read all about the MEN of IPL as I explore exactly what makes cricketers so DAMN SEXY!

I Miss Living In India During IPL (RCB Cricket)