When I was a young girl I remember, for whatever strange reason, the fun of going “underwear” shopping with my mom and sister in California. Mom would tell us how many pairs we could buy and we’d spend AGES in the lingerie section looking at the styles and colours and patterns of underwear in our size, all of them hanging from little hangers and neatly lined up. We could see everything that was available at-a-glance, feel how soft they all were and just generally inspect each and every one. I also remember how “big girl” I felt when I transitioned from the cotton undies with the wide sides and little sheep or flowers or kittens on them to ones with thinner sides and a less infantile drawings on them. I was probably in my early teens at the time.

Well, then came the underwear revolution that took us from knickers with a “butt” to the g-string, which luckily for me gained notoriety first in the U.S. I think g-strings hit the shops in California when I was in university and MAN did it change our world. Long gone were the days with scrappy panty lines framing our asses so that the back view of our super tight denim jeans (that we had to lay on the bed sucking our stomachs in to zip up) looked like it was in squares like a chocolate bar!

I guess that 20 years has passed since I first slipped on my first g-string. Since then my taste in lingerie has also evolved. Plus, let’s be realistic and note that people tend to make much more money at 40 than they ever did at 20 years old. That makes it much easier for me to fill up my lingerie drawer with basically whatever I wish now than it was way back then. EXCEPT…when I am in India.

When I moved to India five months ago, I moved with 3 suitcases so obviously I didn’t move with all my shoes, clothes, handbags or, in this case, all of my lingerie drawer. Once I unpacked I realized quickly that somehow I forgot to pack white knickers. I thought, “Wow, fun…lingerie shopping in India. Bring it on!” To be honest, I was probably more excited than I should have been simply because it was my first shopping quest in Bangalore but I didn’t care.

I had no idea where to go so as always I asked my trusted driver, Shiva, to help me out on my quest. He suggested we start at Commercial Street in Bangalore which is one long street lined with shop after shop after shop. Shiva was right, there were a few lingerie shops on Commercial Street, so I hopped out of the car and started on my mission. 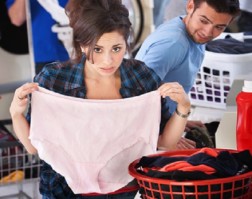 I wanted to buy cute, lace “cheeky bottom” knickers that fit like a glove and feel sexy. I started at the first shop and was a bit disappointed when I walked in and realized that I couldn’t touch and see everything on my own and that the shop worker would have to fetch everything I wanted to see to see from behind the counter. I explained what I wanted and the lady brought me something more like granny panties with a front panel of lace. Haha WTF? Not even close! So I did more hand gestures for the shape of the cheeky bottoms and explained a bit more what I wanted. What she brought out next was pretty damn close to PERFECT. They actually had lace cheeky bottoms! I was so excited. I grabbed the first pair that she handed to me and checked it out. They weren’t La Perla but who cares…they beat the granny panties hands down! I held them up to me, looked down, and realized that they stretched about half way across me! I definitely needed a larger size!

When I asked for the next size up I was told that those were one-size-fits-all and there was no other size. So I asked for another model and we played the same song and dance. Then at the next store and the next store! My ass was too big for the sexy knickers that I wanted to buy. I was so sad!

Apparently only Indian girls with a tiny frame are allowed to wear the type of knickers that I am accustomed to wearing. I’m sorry…I know that I’m not super tiny or stick thin but I’m not HUGE either. So it was a massive blow to my ego that I could only find knickers to fit me that either looked like something I wore back in my teens (sooo out of style) or grannie panties that are the least sexy things on the planet.

I swear I went to eight or nine different shops and then finally gave up and headed to Marks and Spencer and sort of found what I was (kind of) looking for but I am dying to find any shop resembling an American Victoria’s Secret or European Intimissimi in Bangalore.

So where does that leave me in India? As far as I see it, aside from Marks and Spenser my choices are so limited that I think I’ll just go commando!

Learning To Eat Indian Food With One Hand