In middle class America, most teenage kids look forward to starting our first “real jobs” when we turn 16 (the legal age for employment in the U.S.). For me, it meant a huge jump in pocket-money over the small babysitting jobs I had up until then… We didn’t have a lot of money and my Mom struggled to make ends meet every month, so a part-time ‘after school’ job for me would make all the difference in the world. It was 1985 and I lived in southern California, where big permed hair, bright makeup, shoulder pads and neon Madonna style clothes and accessories reigned king. Working meant I could buy whatever I wanted with my own money because Mom said I could keep everything I earned – and I wanted clothes and shoes!

Those first funky jobs in high school and uni are something of a rite of passage for American kids. In fact, I had so many jobs I can’t even remember them all! From working in an ice cream shop, to being a waitress or hostess in a restaurant, to a shop girl at Mountain High, a ski resort in SoCal – which I worked so I could ski for free all season. I worked as a cashier at a fast food restaurant, in the teens section of a department store and later as a bartender when I first moved to Spain in 2003. That bartending job in Spain, at 22 years old, was my last job before I started my career. It was my last job without responsibility and deadlines, where I could chatter and laugh and goof off during my entire shift – and even drink shooters while on the clock. Not a bad way to earn a paycheck.

Those years spent in odd jobs are something I wouldn’t trade for anything. Don’t get me wrong, I have zero desire to go back to minimum wage and waiting on other people. I love my career, love my salary (which I’ve worked hard for 16 years to earn) and I think I have the best job on the planet. But there is something fun about being a kid and learning about customer service and team work before entering the corporate world. It truly helps to train us to be better employees once we start our careers.

Yet from everything I know, most Indian kids looking at going to university will never have the opportunity to work in funky jobs like we do in western cultures. I’ve asked around a bit after an engaging conversation I had with a friend a few days back that peaked my interest on this topic and learned some very interesting things.

The main thing that I’m struggling to understand is the fact that if a kid decided to work in a funky job to earn extra money (either for oneself or to help out the family as a whole) that it would result in the status of the family in the community being slightly demoted and brought down. Family is everything here so that reason alone means that 99.9% of kids in India won’t enjoy the fun of goofing off at a crappy, low paying summer job ever in their life. It’s certainly not the end of the world but I guarantee you that Indian teens are missing out on a rare opportunity to learn some valuable life lessons and have tons of fun outside the home (well, unless the funky job is truly awful and no fun at all).

Another thing I’m having a hard time wrapping my head around is the H.R. practices that are related to this topic. You see, changing jobs and/or companies in western cultures typically means a nice big spike in the pay check, especially when you jump from assistant to coordinator, manager to director, etc… but in India the only way this salary jump would happen would be when the company really wants you and they are happy to pay what you’re worth. Otherwise, general H.R. practices make it almost impossible. It really gets my goat the way companies in India deal with salary and past employment because I personally find it very unfair and discriminatory. Here, when you apply for a new job you have to show your pay slip from your old job. Then the salary for the new job is typically based on a % increase over the old job. This means that if you accepted a low paying job in a time of need or took a junior role with a big company to get your foot in the door but are really earning less than what you are worth – you’re screwed! For years to come, your salary will increase at a snail’s pace because of a decision you made – perhaps – year ago. I’ve personally never seen this before moving here and it can be quite frustrating, rending managers virtually powerless to do much about the salary of their team members.

My driver Shiva says that in the past families were much more numerous than they are now, a reality which changed in recent decades because Indian parents want to provide 100% for their children until their education is complete. Nowadays, it would be impossible for one couple to provide a good education and home life for each child if they had six or eight children…but it is possible with only two. Shiva also told me that if his son or daughter asked permission to take on a job during school breaks that he would definitely say no. In part because he wants to maintain his place within the community and if his children went to work there would be negative judgment from neighbours. But also – which I find very interesting – is because he doesn’t want his son to have so much pocket change and become accustomed to dining in restaurants or going out to socialise because that is not the lifestyle he wants for his future. Shiva hopes that his children will follow in the traditional values and lifestyle they are living now, when they are older and starting their own families.

Still, it’s interesting to compare what is no big deal in one country with something that is a very big deal in another. I can remember back to when I was just a little girl when my sister and I setup a lemonade stand in front of our house one summer just for fun. 10 cents bought 2 Bazooka bubble gum packets at the 7-Eleven mini mart around the corner so we thought we were rich if we sold just a few glasses at 10 cents each. Although I didn’t know it then, we were little entrepreneurs out there having a jolly good time! But if two little girls did that here, their family would be the talk of the village – and I doubt the chit-chat would be “oh, did you see how cute Priya and Ruchika look out there selling their lemonade? I bet they’ll grow up to run their own businesses some day!”

///18-July UPDATE!! My daughter is on her way home from landing a month-long internship with the video department of the world’s leading advertising & communication agency at their main Bangalore office. She’s so excited to have this to add to her college applications in the fall. I’m so proud of her!!// ORIGINAL TEXT: I’m sure that if we were still living in Spain or California that my daughter would have wanted to work at a part-time job this summer now that she’s 16. I wouldn’t have thought twice about saying yes because for me it seems like the most natural, normal thing in the world for a teenager to do. It would be great to see her making money and fine-tuning her people skills and communication style.

So often I feel like the black sheep when it comes to these little comparisons of cultural differences that I do on the blog…but not today. I’m really proud of the experience I garnered in all my little odd jobs before I started my career. From being a waitress in a themed restaurant where we all dressed in costume and played a character while waiting on people (I was Jackie Daniels – an old west saloon girl who talked with an accent and wore a feather in my hair and a can-can dress), to being the only white girl in a Mexican fast food restaurant one summer … they all taught me something. And I know my mom was happy I was making my own money because it took a lot of pressure off her. Trust me, I dream about the day my daughter is financially independent and I can reinvest the money I spend on her on shoes again!

Indian Eco Packaging: Bag Me Up Some Juice and Curry and Milk, Baby!

Bangalore FRRO Guide: How To Register or Apply for a Visa Extension Using the New Appointment System

Masala Dosa Crazy! The Day I Worked in a Typical Indian Restaurant 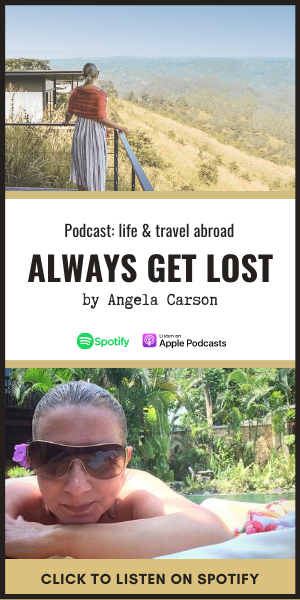