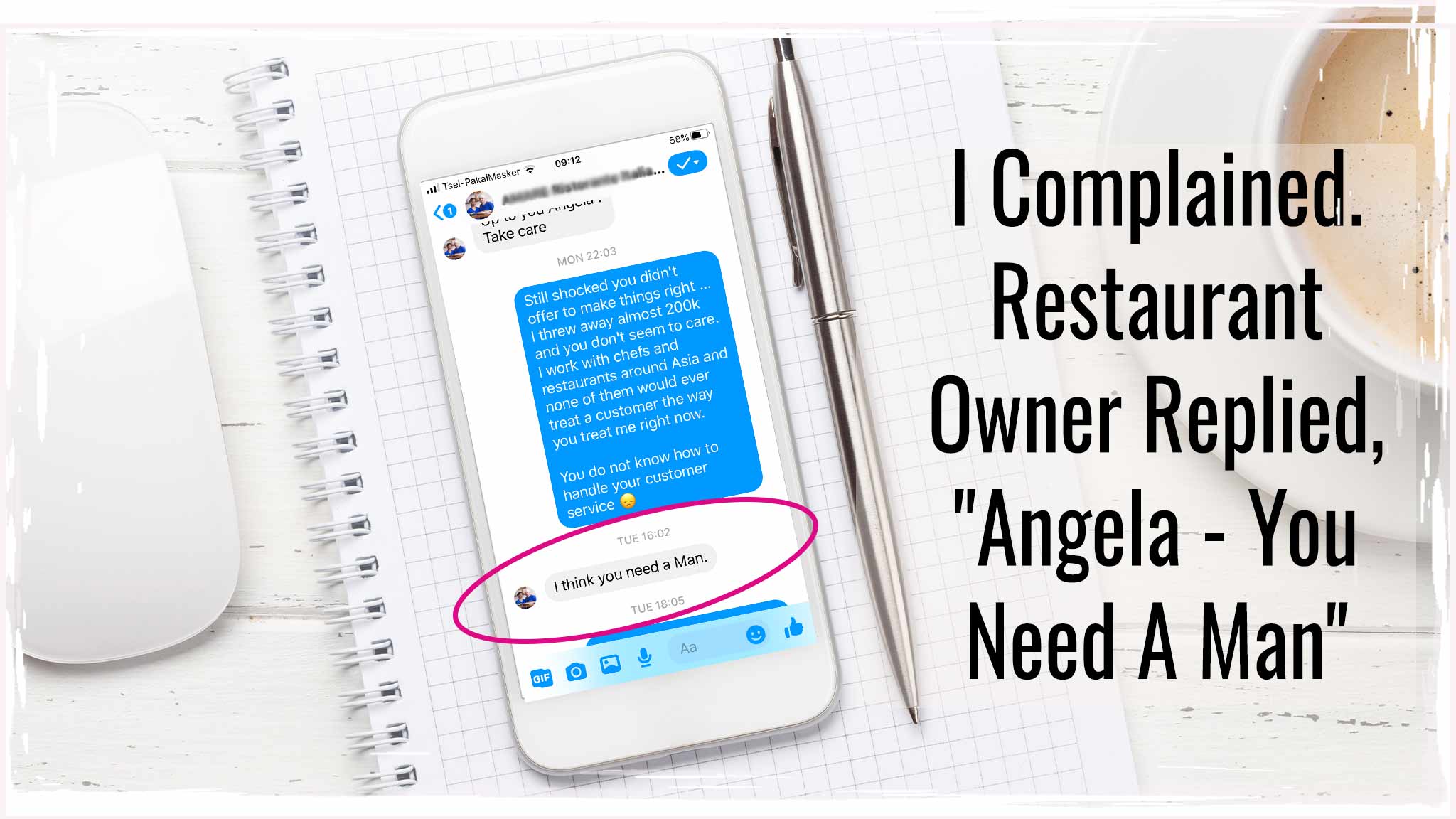 Please note: I’m leaving the name of the restaurant out of this, I just want to tell the story, not blast the owner again. If you’re a restauranteur, at the bottom I’ve also included best practices for how to deal with this situation the right way (I’m a hospitality marketing & branding consultant by day).

This crazy saga began close to two weeks ago. I ordered bruschetta and a cheese & deli meats platter for lunch from my favourite restaurant on Indonesia’s island of Batam, located just 45 minutes by ferry to Singapore. Sadly, when the charcuterie platter arrived, it was nothing like the restaurant’s traditional standards, as you’ll see below. Not one single item looked freshly cut or inviting enough to eat, so I binned it.

I messaged the owner to share my experience. He didn’t reply right away but when he did he said that since the borders have closed he no longer has access to high-quality, imported products. He recommended I order a pizza next time and signed off.

I replied back suggesting he remove the board platter from his menu since it’s no longer up to his quality standards. And in another back and forth exchange, I shared how shocked I was that he didn’t offer to replace the board platter with something else.

He simply replied, “You need a man.”

To say my jaw dropped would be an understatement.

I currently have several restaurant clients and I know exactly how each of them would reply to even the smallest complaint about quality or a service mishap, and I know that misogyny and rudeness aren’t tools in any of their arsenals. Even if a complaint isn’t justified, any chef, restauranteur or social media manager generally knows to be respectful and not sexist.

But not this owner. He later will even take pride in how he dealt with me.

So I called him out for his misogyny on social media. Not on my channel’s Facebook page but on a closed expat Facebook group for our island. He didn’t seem to care. In fact, he doubled-, tripled-, and then quadrupled-down on his insistence that I needed a man … as if that would have changed my complaint. Check them out:

What Happened Next Was Crazy

The last time I’ve been personally attacked in this way was when I lived in India. Any time I wrote a blog post about my experience of being groped or on the mistreatment of some Indian women, some Indian men would attack me with venom. They can’t hear the truth for some reason and would hatefully attack me in comments and messages. They said I was lying, that I didn’t understand their culture, left racist comments about me, and a couple standout commenters even wished that I could be beaten. It would get pretty intense but all of that ended in 2013 when I moved to China … but it felt back again the past couple of days.

The island I live on is small and the restaurant owner has been here (I believe) upwards of 15 years. He has a loyal and passionate customer base. Hell, I was one of those passionate customers until he told me I needed to get laid (I’m assuming that’s what he means and not that somehow I have no value as a person unless I’m in a relationship).

Where I live is also quite unique when it comes to the expat scene. There are traditional expat couples, generally with one working in oil and gas, which is their reason for relocating. Batam is also a bubble and haven for Western men married to younger Indonesian women. What I’ve found by experience is that a decent handful of these men are over-the-top misogynists (but not all, thankfully). I’ve experienced it first-hand several times since moving here in September 2019 … I’ve even been yelled at once and told to f*ck off at a party for not letting one guy walk all over me.

When I first launched the post, the comments were of rightful shock, with people sharing how unacceptable this behaviour was. There was even a female restauranteur on Batam who shared her dismay and kindly offered to share her import suppliers that are still delivering today. (Honestly, even I get boxes and grocery items from Singapore sent across on the ferry, I do not believe the owner’s reason for why he downgraded his quality. I think it’s just hard times and he is cutting corners. That’s fine but tell the customers, don’t try to pass off inferior products for the old high-quality ones.)

But then — almost exclusively — I started being attacked by the Western/Indonesian couples. At that point, everything turned away from a post about unacceptable customer service and turned into targeted personal attacks on me or any commenter who sided with me.

The nicest were the comments that straight-up told me I was wrong because this person or that person had always enjoyed dining at the restaurant so they had no idea what I was talking about. Those comments had nothing to do with the thesis of my post >> the owner’s rude, misogynistic reply to a valid complaint. Past dining experiences are 100% irrelevant to the topic at hand.

The worst of the comments were either extremely racist towards me as an American or grossly sexist. Both men and women perpetuated the original “get a man” comment with pride, which I found bizarre (what lessons are they teaching their daughters?). There were friends of the owner’s spewing lie after lie about me. Oh! And the owner himself decided to write a long comment with his feelings about me, see that here:

I shared my post + a few comments (including the owner’s) to my Italian client Riccardo in Kuala Lumpur (he owns Bottega, a must-visit café & deli next time you’re in KL). He immediately messaged me and said, “Just reading those comments really pissed me off because it’s an insult to any restauranteur. He is insulting everyone else by commenting like that. It’s obvious he shouldn’t have served that. The meat looks horrible. And all the other people beside him telling you you’re an American and need a man. They are racist or what? If they don’t like that you’re American it has nothing to do with the delivery of food. Very ignorant people. This irritates me a lot.”

All in all, this has been a real shit show. No one walks away a winner here. The owner has lost a fair number of customers over this. Not his diehard fans and buddies who cheered on his misogyny but many of the expat women on the island because they’ve lost respect for him. I had to endure the personal attacks and lies told about me, which thankfully turned comical they were so ‘out there’. In fact, the only good thing for me is that this will make a great case study to share with my F&B clients on how NOT to behave towards customers.

Now, for some tips!

What The Owner Should Have Done

One of the commenters who sided with me wrote something so right. He said, “It can take 3 months to find one new customer and only one moment to lose many.

At this point, I know it’s useless to share customer service best practices directed to the owner. But in case you have a restaurant or cafe and are reading this, here is what the world’s top chefs, social media managers, and restauranteurs would have done:

[Fiction] A White Woman and Indian Man Fall in Love. But Will It Last?