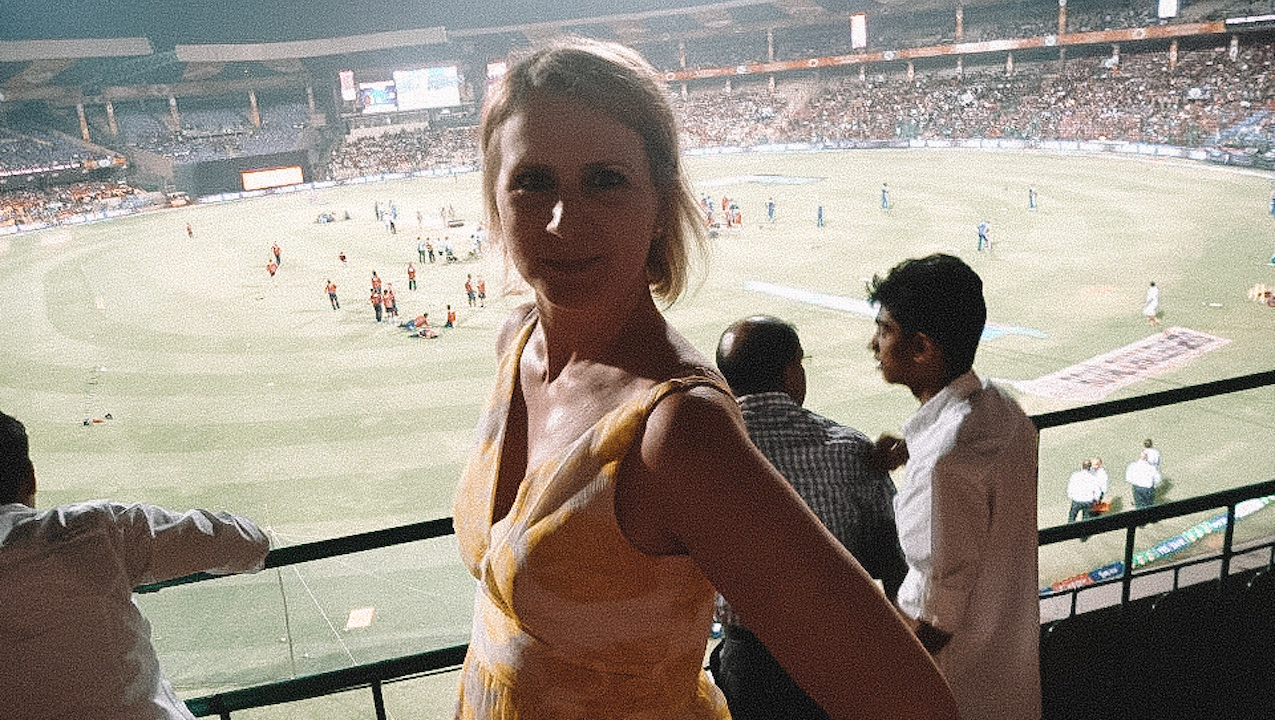 Quite out of the blue, I was contacted today by a correspondent of one of the most prestigious newspapers in the U.S. who wanted to talk about MeToo experiences in the sports world of Indian cricket. She’s doing a story that sounds quite interesting and (in any other country) would be explosive. But all afternoon (and as you’ll read later in this piece) I can’t stop thinking, “It’s not going to change a damn thing in India, is it?” As much as I’d like to say it would and that it’s going to hold abusive men accountable and deter the others from abusing women in the future, I’m just not sure it would sadly.

It may surprise some of you to learn that I had a short-lived career and diverse background in cricket thanks to my three years living in Bangalore. Within a few months of arriving, I was working as a freelance PR and marketing consultant for a new league of young players and attending meetings at M. Chinnaswamy Stadium regularly with Anil Kumble, Javagal Srinath, and many others. I’d attend IPL “after” match parties and the after-AFTER parties with the players at ITC Gardenia where the guys all stayed during IPL. I wrote a cover feature for MAXIM magazine on the truth about IPL cheerleaders. I’d attend games on behalf of Wisden to write a peppy column titled “Girl In The Stands” (it was very fun!). Oh and I had an affair with a famous IPL cricketer during two seasons.

While I have mostly positive stories to report from my time around cricket, there was one totally unpleasant experience with an executive of the KSCA (Karnataka State Cricket Association) who abused his power in an attempt to elicit sex from me. The incident didn’t happen in a wild hotel after-party as one might assume. It happened at work.

My India MeToo Story of Harassment in the Workplace

The memories of it were fuzzy and thankfully there is no trauma in me because it wasn’t physical abuse … just an attempt to abuse power as some men do. In fact, when I told the reporter about it during our call, I told the story kind of wrong. There were details I forgot, which I remembered instantly when I searched my emails and backup hard drive. I found an old phone chat with my daughter that I had emailed to myself on the day it happened and there it was. I’m sure I emailed it to myself for moments like this … when my already poor memory started to fade and I needed a reminder.

I was working on a new website for the cricket league and it was well beyond the time when the project should have been signed off on and a deposit paid to me. The man who needed to sign my invoice was the CEO of the KSCA at the time and he was playing me. I didn’t realise it at first because in India things don’t always move along at a snappy pace. But on the day the project was set to be signed off on, it became clear. If I wanted the CEO to sign off on my project I’d have to have sex with him.

I arrived to his office in M. Chinnaswamy Stadium as agreed and he had me sit down and closed the door. He told me that he didn’t have time to meet with me at that moment but that later that day we could finalise things over dinner. I wrote in the message thread to my daughter jokingly, “Awesome, free food!” The CEO asked me what neighbourhood I lived in and I told him Fraser Town and he said he’d come that way around 7pm.

When the time came he called and I grabbed my bag and started walking down to the car where my driver Shiva was waiting. I told the CEO to meet me at Elements on Fraser Road, a quaint restaurant across from the neighbourhood mosque that did not serve alcohol. He told me he was close by and on his way to pick up wine and whiskey and to stay put at my flat. He was coming to me and we could eat there and drink together.

What the serious F*ck?

I was leading PR and marketing for a new cricket league and he wanted to play house with me?

I told him no as sweetly as possible and that I would meet him at Elements and he said something like, “No no, I’ll come to your flat and you’ll cook for me.” I told him no and that I wanted to go over the marketing and website project and he persisted. I tried to laugh it off and kept protesting because I couldn’t believe what was happening. I held my ground and definitively told him no.  He backed out of dinner.

I can’t be 100% sure that it was a pay-to-play scheme by him because he never said it straight out but I know he did his best to make it seem that way. After that encounter, the CEO no longer returned my calls. He stopped replying to emails. And I could get no further support from anyone else to progress the project.

So my cricket PR career ended before it was it was off the ground but that’s okay. I wouldn’t have been able to hold my head high if I had climbed that ladder the way the CEO intended me to do.

I wasn’t invited back to league board meetings and that was the biggest loss for me because they were crazy fun. I love the energy that surrounds cricket. On top of that, it’s always fun on some level to be the only woman in a boardroom dominated by men. I remember shocking the hell out of them the first time I spoke up when they were all wrong about a proposed PR strategy. More than a few heads got whiplash in that meeting!

So I found my passion in writing about cricket. I attended games, started writing features on the IPL cheerleaders the next year, and have a very positive memory of Indian cricket besides that idiot CEO’s attempt to abuse his power.

Why I Fear #MeToo Won’t Work In India

A #MeToo needs to happen in India. Just like conversations about rape and sexual assault needed to happen after Jyoti Singh’s tragic gang rape in 2012. But in my opinion the effects of the movement won’t be felt until many years – or even decades – from now. They say that things take time in India but WOMEN DON’T HAVE TIME. They are victimised every day in India in ways that are different to other countries, (which I wrote about in exhausted detail here in case you’d like to learn more).

Now before anyone starts to leave comments about how sexual assault happens everywhere and is worse in other countries please know that I 100% AGREE. But this particular piece is ABOUT India so please look inwards and talk about how you’d feel if it was your sister or daughter or wife who was talking to you about harassment in the workplace, sexual assault, or their MeToo story. This is about them, not you.

The concern I have is that India is a man’s world. Period. Regardless of the idea that there are female gods and that women are worshipped. Women aren’t free like men are free in India. It’s a simple truth. Also:

I write this fully aware that my work harassment #MeToo story has zero to do with violent crimes against women and that 99.9% of victims aren’t lucky like me. Most victims don’t have the option to say NO from the safe distance of a mobile phone call. Most victims who SHOULD come forward in the #MeToo movement are too scared to do it. They had their lives so violently changed that they will never be the same for the rest of their lives.

That shouldn’t be the case. Victims should get justice. They NEED justice to know that their trauma was a crime, that they ARE a victim, and that it wasn’t their fault. And they need the judicial system – in its small way – to help to right the wrong. But it’s my personal bias and fear that says Indian women are still too far away from having a fair and equal voice in the country. Maybe I’m wrong. I hope I’m wrong. For all my millions of Indian sisters out there, I pray I’m wrong (and I don’t normally pray!).

I’m not setting out to rant at India. Trust me, I have more personal topics to rant about for when I choose to unload. I just wanted to share my small experience. And help to open up a broader conversation on this topic if that’s possible. India is a beautiful land with people I love and respect and I only want the best for the country. The way I hope she wants the best for the girls and women who live there.