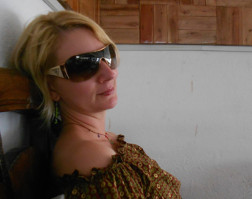 I don’t often write just about me.  In fact, this might be the third time now in the 6 months since I started this blog amongst the 90+ articles that I’ve written.  But I have a writer’s block of sorts.  Not that I can’t write but I’m having a really hard time thinking of NICE things or funny things to write about from my day-to-day life because I’m going through a rough time at the moment.

I know that I am luckier than most but my “tough time” is a combination of everything that anyone goes through from time to time.  At the moment I am in a bit of a slump and in the microcosm of my life …. there are always good moments and bad.  And at the moment it’s hard to keep smiling or stay positive.

As such, I’ve slipped over a bit to the dark side on the inside.

Moving to a new city or – in my case – a new country can be hard on anyone.  Leaving behind the security and warmth of friends and family who are an undeniable safety net is a risky part of the thrill of the adventure. Leaving behind those people who cared what happens to me on a daily basis has definitely been rough on me emotionally.  Sometimes it’s the big things, other times it’s the small things that make me feel homesick.  For example, during Diwali, (the Indian version of Christmas), I wasn’t invited to a single home or included in any family celebrations, which I imagine are really fun affairs.  But I assume that I’m simply not close enough to anyone at this early stage in the game to have warranted such an invite.  Though I did enjoy the start of the festivities because it was lovely to see so many families together enjoying the fun of Diwali…but it made me miss my own family and friends even more.

For as social as I am, I’m lonely as hell at times.  But it’s to be expected.  I have only lived in Bangalore for 6 months now so I don’t have “best friends” that stay in daily contact after such a short amount of time so it really makes me long for and miss my friends back home in Europe.  You know those friends who “get” you without any misunderstandings.  The friends who are like family when you live so far away from your own family?  In part, that’s what I’m missing at the moment more than anything.  I know that these friendships will grow in time and that these relationships are BUILT by trust and respect and I look forward to having this again sometime soon here in Bangalore.  Plus I’ve screwed up a couple of times and opened my mouth when I shouldn’t have since my arrival, thus hurting a couple of new friends who I truly adore here in Bangalore so part of my problems are certainly of my own making.

Next…I’ve been single for 7 years but lately I’m starting to consider leaving single-dom behind and dating.  Maybe settle down with a boyfriend if I meet a smart, handsome, funny and adventurous man.  The epiphany hit me around my birthday last month, which was probably triggered by the realization that I am actually NOT going to get any younger.  Plus I probably caught the relationship “virus” from any number of infected people in this relationship happy land — it was bound to happen.  Well, when I told this to a friend of mine last month he proceeded to tell me that I wouldn’t find anyone to actually love me here because Indian men are only ever going to want to “get busy” with me, they won’t take me seriously and they won’t respect me.  WOW!  Now I have to be honest and say that it never occurred to me EVER, not for a single minute, that I couldn’t find a great man here in India but… is that true?  A fellow writer friend of mine, a stunning Aussie woman, found love in India.  I know a lovely engaged woman here in Bangalore who is also wonderfully happy with an Indian.  So why not me?  I know that this friend of mine is likely wrong but the words actually hurt and I keep replaying them in my head.  And in my current state of mind…it is definitely an opinion I wish he had kept to himself.  It’s a really depressing thought, actually.  Not really a “wind beneath my wings” sort of thought, is it?

Mount on this the financial strain of having lost the job I moved across the world for after only 7 weeks, and the fact that this move has cost me 5x what it should have cost me plus my entire savings account on the crazy 10-month rental security deposit rule in Bangalore … I am stressed out!!  Things might be different if I received child support from my ex-husband like a normal person but he refuses to pay and I haven’t had the energy to take him to court over it (okay, to be fair in the past 5 years/60 months he paid 3 of those months!).  And since I typically earn 3-4x what he has ever earned it never really mattered much to me.  But that was then and this is now and things are different at the moment so some ‘support’ would be amazing.

On a positive note, I have been writing more than ever in my life.  And I have a new job that I adore leading and building the MarCom team for a wonderful and amazing BPO company.  But at the moment I am contracted only part-time during my trial period so nothing is certain and the salary is as one would expect from the situation.  Yet I want to work my tail feathers off for them and quickly return to some stability and a “normal” life (both mentally and financially) after I start delivering results and my trial period is over.  So…there is a light at the end of that tunnel thankfully.

Most of the time I am completely in love with India, and the choice I made for my new home.  My daughter is doing great in school and has made friends quite quickly.  Even the cats are happier here since we live right on a park and the bird watching is kick-ass for them!  But today, and every once in a while, I wonder if India loves me as much as I love it?  Maybe I need to volunteer somewhere or clean up my karma somehow to snap out of this rut just a bit quicker?  Or…just be patient, which is certainly not my strong suit.